What is a CS:GO Private Rank?

CS:GO Private Rank is earned By playing on official game servers, players gain experience points to increase the player’s Private Rank. The first time the player ranks up in a week, the player also receives a weapon drop. Prior to Operation Hydra, the operation’s pass holders are eligible to receive rewards exclusive to the operation’s weapon collections during an active operation. Players participating in the Overwatch program also gain additional experience. 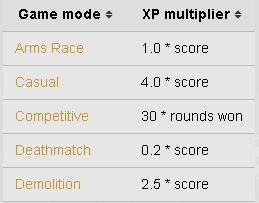 How to earn XP with cs go Over Watch feature?

Overwatch is only enabled if You have 150+ csgo wins and a rank which is or above cs go gold nova rank, in an overwatch session the player is required to watch the game demo of the suspected cheater (reported by players who played competitive matchmaking with him) the identity is kept secret. once the player finishes watching the game he is given an option to review the game (he is hacking or not) and it looks like this,

if u successfully confirmed the guilt of a suspect cheater, the player will gain an Overwatch XP Reward. It will be first notified to the player on the main menu, and the Investigator will redeem the reward of 195 XP the next time they finish a match on an official server.

The operations are in the following order from the latest to obsolete.

New Operations no longer give players item drops. Instead, they award XP points to the player, and players with Operation passes who rank up during the Operation are then eligible for Operation exclusive item drops.

Increasing CS:GO Private Rank up-to 40 enables you to get cs:go service medal, you get a different coloured service medal each time you rank-up to private rank 40